Richard Gush arrived in South Africa with the British Settlers of 1820, having left London to make a new life in a wild and unknown corner of the British Empire - the Eastern Frontier of the Cape Colony. His son, Joseph purchased the property named Woodbury in 1854. 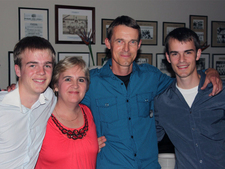 Today, two of his descendants, cousins Giles and Richard Gush, have become two of the founders of Amakhala Game Reserve. Amakhala is a private reserve and was formed in 1999 by six 1820 Settler families. The farmland was combined into a single 7500ha area for the purpose of returning it to its natural, wild state. Since then, wildlife from elephant and rhino to springbok, jackal and caracal to cheetah have returned to the land where they roamed before the Xhosa and Europeans arrived in the 1700's. Lodges and camps have been built to supply the ecotourism industry and the reserve is a functioning wild ecosystem once more.

The management of Amakhala is guided by research and monitoring undertaken by the Ecology Unit and support and expertise is often sort from Rhodes University situated in Grahamstown as well as the Nelson Mandela Metropolitan University in Port Elizabeth.The Conservation Centre is run under the directorship of Dr Jennifer Gush. The Amakhala Foundation (a registered South African Non-Profit Organisation) plays a role in the conservation projects within the reserve. The Foundation also manages an environmental education programme for schools in the region and a socio-economic development and support programme in nearby Paterson Village.

The first phase of Woodbury Lodge was completed during 1999 and consisted of Krans and Fish Eagle lodge as well as the dining room, deck and boma area. This was a virgin bush and great care was taken to only remove indigenous vegetation where absolutely necessary, and to provide each lodge with a special view. Most of the design was done by Richard and his staff, with the stone coming from the surrounding farm land. The next phase consisted of the construction of Jackal Buzzard and Dassie lodge and the kitchen, lounge and pool areas. Lastly the two family rooms (Elephant and Zebra) were built and the lounge extended.